*Speakers for our 2021-2022 are funded by a generous contribution by Humanities Washington and require registration to attend.  Please see the links below to register for each event.  Thank you. 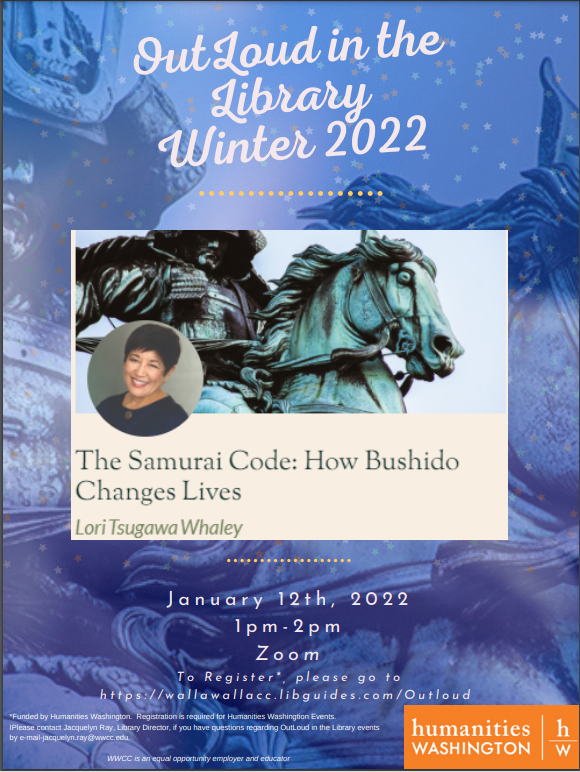 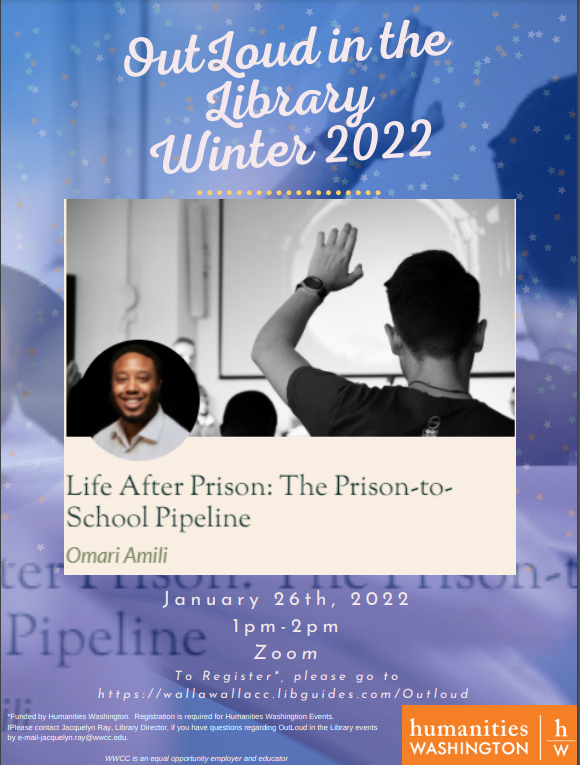 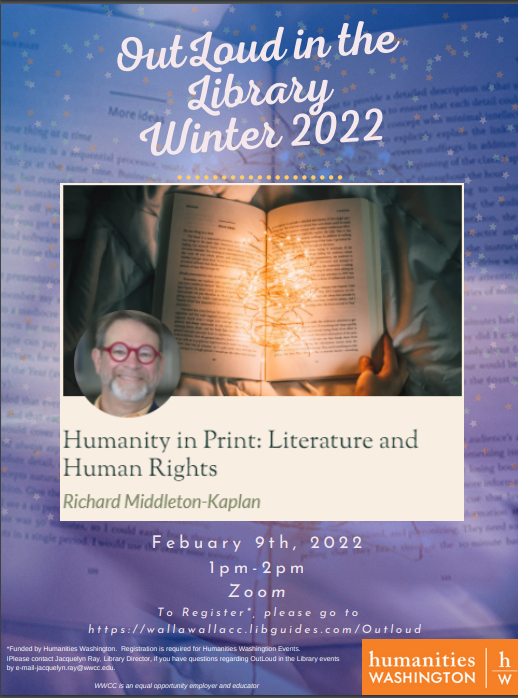 Dr. Richard Middleton-Kaplan has kindly shared his powerpoint and a recording of his talk. 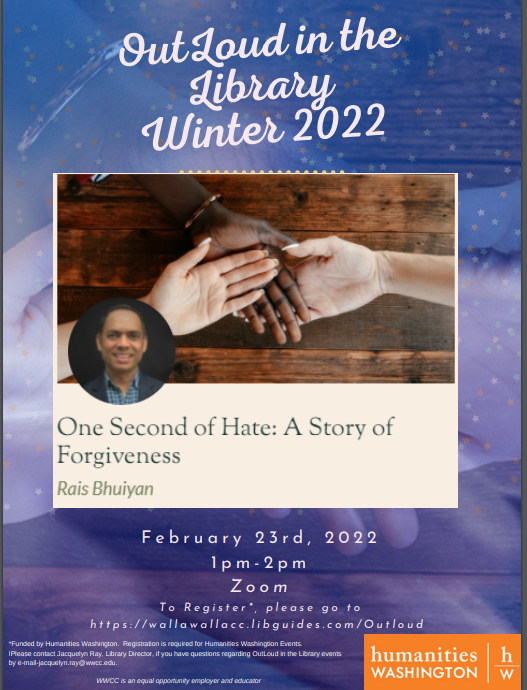 Life After Prison: The Prison to School Pipeline

Please register for this event at the following link:
https://wwcc-edu.zoom.us/meeting/register/
tZErceqrrDgsHNzyDc2KiW6B3uq4bESvOCrx

You may have heard stories about tragic outcomes related to the “school-to-prison pipeline.” In this discussion, Omari Amili introduces new possibilities and challenges fear-based narratives through his exploration of a potential new pipeline that runs from prison to college.

While sharing his story and exploring the history of mass incarceration, especially in Washington State, Omari explores how society as a whole benefits when people pursue higher education after incarceration.

Omari Amili (he/him) is an author, speaker, and community organizer. Since his release from prison in 2008, he earned a master’s degree from the University of Washington Tacoma, where his research focused on the benefits of college education for formerly incarcerated people. In 2018, he was named a Distinguished Alumni by Pierce College, and has been featured in the Seattle Times and the News Tribune.

Please register for this event at the following link:
https://wwcc-edu.zoom.us/meeting/register/

Bushido—the way of the warrior—is the code of ethics practiced by the samurai warriors of ancient Japan, a code which includes courage, integrity, benevolence, respect, honesty, honor, and loyalty.

Through her own story of using Bushido to overcome a traumatic brain injury, Lori Tsugawa Whaley shows how the code can help people find hope, resilience, and fulfillment in our rapidly changing world. She explores examples of ancient warriors like Tomoe Gozen and Saigo Takamori, as well as modern-day samurai warriors like the Japanese Americans who survived incarceration during World War II. She shows how Bushido instilled a determination and perseverance in Japanese society that remains evident to this day.

Lori Tsugawa Whaley (she/her) is a third-generation Japanese American and descendant of a samurai warrior. She is an author, speaker, life coach, and storyteller, and is passionate about sharing the code of Bushido and her Japanese heritage at universities, TEDx stages, libraries, and cultural venues across the West Coast. She earned a bachelor’s degree from Portland State University.

Please register for this event at the following link:
https://wwcc-edu.zoom.us/meeting/register/
tZUrce2oqzMsHdM3CVhhJIgNAkShEa69N4MY

We don’t extend human rights to people we don’t see as fully human. So how do we develop empathy for those we view as alien or inhuman? One way is through literature, which takes us inside the lives and actions of others. By instilling empathy, and by giving voice to cries for justice, literature forms the foundation for human rights.

Professor Richard Middleton-Kaplan shares stories about human rights activists he has encountered throughout his academic career. What these activists endured was shocking, yet they found meaning and beauty in literature, and so can we.

In this talk, audiences will discuss literary works that illuminate how to respond to those around us who have suffered human rights violations, and those who have committed incomprehensible acts. These works can even help us to make sense of the wrongs that we ourselves have endured.

Richard Middleton-Kaplan (he/him) is the dean of arts and sciences at Walla Walla Community College. In 2011, Richard spent a sabbatical at the Centre for Applied Human Rights at University of York, helping to develop a course on literature and human rights. His publications include “Using Literature to Teach Peace” in Peace Research: The Canadian Journal of Peace and Conflict Studies.

One Second of Hate: A Story of Forgiveness

Please register for this event at the following link:
https://wwcc-edu.zoom.us/meeting/register/
tZckdeCspzIiGdLr50m0lzFQ28AhOrB9b7vA

“Where are you from?”, his attacker asked before shooting Rais Bhuiyan during a killing spree in Texas shortly after 9/11. The attacker, a white supremacist, had been hunting for “Arabs” and perceived Muslims, though not one of his victims turned out to be from the Middle East. Despite being shot in the face, Bhuiyan survived, but two other victims did not.

Remarkably, not only did Bhuiyan forgive his attacker, but he also spent months trying to save him from death row. In the process, his attacker, a man named Mark Stroman, renounced his white supremacist beliefs and expressed deep regret for his fatal actions. In his final words before his execution in 2011, Stroman said, “One second of hate will cause a lifetime of pain.”

Our stories have the power to connect, inspire, heal, and even save lives. As divisiveness continues to permeate our communities, Bhuiyan shares his story of resilience and reconciliation. Stories can help us replace ignorance with understanding, fear with acceptance, and hate with empathy—all pathways toward a more equitable, just, and peaceful society.

Rais Bhuiyan (he/him) is the founder of World Without Hate, a nonprofit focused on preventing and disrupting hate and violence and restoring peace and understanding through storytelling and empathy. His story is chronicled in The True American: Murder & Mercy in Texas by Anand Giridharadas.

Should We Build "Better" Humans?

Should we use biotechnology to make humans “better?” Gene editing, pharmaceuticals, and computer tissue implants, among other interventions, will soon be used not just to treat problems, but to enhance human abilities.  Everything from our physical capacities to our emotions, intelligence, and personalities could soon be enhanced or altered according to our wants—or the wants of others.

How might biomedical enhancement reshape humans and society? Should we support and prioritize this research? What are the ethical questions that we as individuals and a society need to answer? Join Bill Kabasenche, professor of philosophy, for a discussion on what defines humanity, and how technology could change that forever.

Bill Kabasenche (he/him) is a professor of philosophy at Washington State University’s School of Politics, Philosophy, and Public Affairs. He is also the ethics thread director for the WSU College of Medicine and a fellow in the Center for Reproductive Biology. He has written about the use of pharmaceutical and genetic interventions to enhance human capacities for memory, moral behavior, and athletic performance.